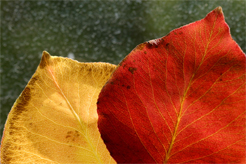 Tree leaves: A free source of energy, literally falling from the sky.

A perpetually renewable energy source -- tree leaves -- may be the ideal earth-friendly biofuel feedstock for the production of ethanol and / or as a secondary fuel source for power plants.

A thought paper by Eric Knight.

Every autumn, around the world, skylines turn to beautiful hues of color as trees go through their annual metamorphosis. After their picturesque demonstration is over, the palette of leaves dry up and fall to the ground.

As students learn in school, leaves transform sunlight, carbon dioxide, and water into carbohydrates (sugar, starch, and cellulose) and oxygen in a process called photosynthesis. Each leaf is like a living "solar cell", storing and using the sun's energy. Even after a leaf dries and falls to the ground, like a tiny battery, significant energy remains.

Can the energy contained in leaves be harnessed to help address the world's ever-increasing fuel demands? That's the question posed by my thought paper.

With the growing trend towards the development and creation of "biofuels" -- particularly ethanol from various biomass elements (such as corn) -- tree leaves may be an appealing option. That's because, unlike corn ethanol production, the utilization of tree leaves to produce cellulosic ethanol would not increase the levels of carbon dioxide in the atmosphere. This impressive advantage, by itself, makes power generation from leaves worthy of further exploration.


First, some important background on biofuels.

Many scientists point out that that the current repertoire of biofuel sources is not as earth-friendly as it may initially appear. Some of the complex thinking underlying this perspective is neatly summarized by the following quote from an April 15, 2007 article entitled "Fuel for Thought - Not All Biofuels Are Created Equal" by David Tilman and Jason Hill in the Seattle Times:

"Biofuels, such as ethanol made from corn, have the potential to provide us with cleaner energy. But because of how corn ethanol currently is made, only about 20 percent of each gallon is 'new' energy. That is because it takes a lot of 'old' fossil energy to make it: diesel to run tractors, natural gas to make fertilizer and, of course, fuel to run the refineries that convert corn to ethanol."

Tilman and Hill touch upon a number of essential points, including:

"In terms of environmental impact, all biofuels are not created equal. Ethanol is the same chemical product no matter what its source. But ethanol made from prairie grasses, from corn grown in Illinois and from sugar cane grown on newly cleared land in Brazil have radically different impacts on greenhouse gases."

"Corn, like all plants, is a natural part of the global carbon cycle. The growing crop absorbs carbon dioxide from the atmosphere, so burning corn ethanol does not directly create any additional carbon. But that is only part of the story. All of the fossil fuels used to grow corn and change it into ethanol release new carbon dioxide and other greenhouse gases. The net effect is that ethanol from corn grown in the Corn Belt does increase atmospheric greenhouse gases, and this increase is only about 15 percent less than the increase caused by an equivalent amount of gasoline. Soybean biodiesel does better, causing a greenhouse-gas increase that is about 40 percent less than that from petroleum diesel."

The authors point to some alternatives to corn and soybean -- and their ecosystem benefits:

"In a 10-year experiment reported in Science magazine in December, we explored how much bioenergy could be produced by 18 different native prairie plant species grown on highly degraded and infertile soil. We planted 172 plots in central Minnesota with various combinations of these species, randomly chosen. We found, on this highly degraded land, that the plots planted with mixtures of many native prairie perennial species yielded 238 percent more bioenergy than those planted with single species. High plant diversity led to high productivity, and little fertilizer or chemical weed or pest killer was required."

"The prairie 'hay' harvested from these plots can be used to create high-value energy sources. For instance, it can be mixed with coal and burned for electricity generation. It can be 'gasified,' then chemically combined to make ethanol or synthetic gasoline. Or it can be burned in a turbine engine to make electricity. A technique that is undergoing rapid development involves bioengineering enzymes that digest parts of plants (the cellulose) into sugars that are then fermented into ethanol."

"Whether converted into electricity, ethanol or synthetic gasoline, the high-diversity hay from infertile land produced as much or more new usable energy per acre as did fertile land planted with corn for ethanol. And it could be harvested year after year."

"Even more surprising were the greenhouse-gas benefits. When high-diversity mixtures of native plants are grown on degraded soils, they remove carbon dioxide from the air. Much of this carbon ends up stored in the soil. In essence, mixtures of native plants gradually restore the carbon levels that degraded soils had before being cleared and farmed. This benefit lasts for about a century."

"Across the full process of growing high-diversity prairie hay, converting it into an energy source and using that energy, we found a net removal and storage of about a ton and a half of atmospheric carbon dioxide per acre. The net effect is that ethanol or synthetic gasoline produced from high-diversity prairie hay grown on degraded land can provide energy that actually reduces atmospheric levels of carbon dioxide."

The full article can be viewed online here: http://seattletimes.nwsource.com/html/opinion/2003665601_sundbiofuels150.html

If prairie hay can be harvested as an earth-friendly biofuel feedstock -- why not leaves from trees?

Leaves that fall from trees are tremendously abundant, worldwide. The cellulite properties of hay and leaves are similar. It would seem that leaves could provide a nearly unlimited and naturally renewable energy source.

Just as with prairie hay, as leaves grow they absorb carbon dioxide from the atmosphere; the growth of leaves are a natural part of the global carbon-dioxide cycle. Unlike current biofuels (corn, soybean, sugar cane, etc.), leaves do not need fertilizers or fossil-fuel assistance (such as to run cultivating machinery). In fact, leaves do not need any human or mechanical assistance to grow.

Bottom line: Because leaves do not require fertilizers or other contributions from fossil fuels, their combustion does not create any additional carbon dioxide.

It would seem like a sound area of research would be to determine if any of the fuel-creation methods mentioned by Tilman and Hill could be applied to leaves. For instance, could leaves be "gasified" and then chemically combined to make ethanol or synthetic gasoline? Could they be burned in a turbine engine to make electricity? The authors also mention bioengineering enzymes that digest the cellulose portion of plants into sugars that are then fermented into ethanol.

Another possible energy contribution: Leaves as a secondary fuel in coal-burning power plants.

Although clearly not as elegant as the use of leaves as a biofuel / ethanol feedstock, leaves could be used as secondary fuel in coal-burning power plants.

The combustion of coal at energy plants accounts for more than 50% of America's electrical energy (source: U.S. Department of Energy).

The combustion of coal has become much more efficient and cleaner in recent years. According to the U.S. Department of Energy:

"With many of the combustion advances of the late 20th century now moving into commercial use, the Department's Fossil Energy program has refocused its combustion research program to new types of 'hybrid' technologies -- typically coal-based systems that combine coal combustion and coal gasification into a highly efficient, environmentally clean power-generating technology." http://fossil.energy.gov/programs/powersystems/combustion/index.html

* Could the combustion of the millions of tons dried leaves across the U.S. augment America's energy generation?

* Could leaves be incorporated into the energy-source stream, as a secondary fuel, in the same way as municipal waste and paper-industry residuals? If so, how much energy could leaves contribute?

* How much energy is contained in 30 million tons of leaves that are disposed of annually in America's landfills?

The author has no immediately accessible data regarding the precise combustive energy of a dried leaf. So, for the purpose of this thought paper, a rough baseline assumption will be made that can be verified and refined experimentally at a later date. The assumption for this simple analysis is that burning equivalent amounts of leaves and paper releases approximately the same energy.

With the above assumption in mind, available data shows that, as a secondary fuel, the average calorific value of paper is 15 – 17 MJ (Megajoules) per kilogram (source: Seco Coal, Germany). For the sake of this thought paper, and for comparative purposes, we can use a midpoint of 16 MJ / kg as the calorific value for both paper and leaves.

Thus, leaves have approximately 61.5% of the calorific energy value of coal.


How does 18.45 million tons of coal compare to the annual consumption of coal in the U.S.?


What is the economic fuel value of 30 million tons of leaves?

As described in this thought paper, leaves may have the potential to be an ultra-low-cost and perpetually renewable energy resource. They don't have to be mined (like coal), pumped from the ground or ocean (like oil or gas), fertilized and grown (like corn or soybean), or specially processed, refined, transported, and disposed of (like uranium for nuclear reactors).

As a biofuel feedstock for cellulosic ethanol production, the advantages are numerous. Leaves are essentially free to harvest, are naturally renewable, and are a carbon-dioxide-neutral feedstock.

As a secondary fuel in coal-burning power plants, leaves would require minimal processing and preparation for use as a fuel. Mother Nature dries leaves automatically and efficiently. The leaves are already being "packaged" (in paper lawn bags) by consumers, then collected and transported by municipalities. Albeit overly simplistic to say, but in principle the bagged leaves could be re-routed from landfills to power-generating facilities where they could be blended in with the municipal solid waste that is already being used as a secondary fuel source.


Additional benefit: The elimination of 30 million tons of landfill waste.

The emergence of a leaves-to-energy industry would also have the fringe benefit of eliminating the 30 million tons of leaves added to landfills annually, greatly reducing municipal landfill costs and requirements.


Forests: The mother lode of fallen leaves -- and energy.

Of course, the vast majority of fallen leaves are not the ones collected and disposed of by homeowners and municipalities -- but occur in forests. If a profitable business model could be established, and there was a concerted effort to harvest leaves that fall in wooded areas, the availability of combustible leaves could rise by 100 fold, maybe more. The 1.6% of equivalent coal-energy could conceivably rise by many multiples.

Of course, care would have to be taken to not upset the ecosystem balance created by the fallen leaves on the forest floor. The leaves provide nutrients to the plant life, offer shelter to small wildlife, and create a living environment for microorganisms. Scientific and environmental analyses would have to be performed to determine what percentage of leaf removal would be tolerable by the natural ecosystem.

Bottom line: If the very labor- and equipment-intensive coal industry can be profitable at mining and selling its product for $34 per ton, it would seem that a profitable business model could be conceived for a massively abundant and perpetually renewable energy source. This premise seems particularly possible, given that leaves have similar physical and calorific characteristics as paper -- an already commonly-used secondary fuel source at power plants.

As biofuel feedstock for cellulosic ethanol production and / or as a secondary fuel in cleaner-burning, coal-based power plants, the potential seems to exist for tree leaves to emerge as a new, renewable energy source. Maybe Mother Nature has provided her own way to help keep her planet healthy.

Eric Knight is a futurist, inventor, entrepreneur, and business pioneer. He is the president of Remarkable Technologies, Inc. www.RemarkableTechnologies.com As an inventor, Eric Knight has appeared on numerous television programs and networks (such as CNN, The Discovery Channel, and The BBC) as well a variety of talks shows, including a guest appearance on the Late Show with David Letterman.